KATHMANDU: The mega merger between Nepal’s two pioneer banks, Nepal Investment Bank (NIBL) and Himalayan Bank Limited (HBL), if everything goes as planned, will complete within mid-July and the two entities will start joint operation from July 16.

Satisfied with its initial due diligence audit (DDA) report, the board meeting of NIBL sat earlier this week has already ‘principally’ agreed to go into merger with HBL and now the DDA report of HBL, which will be ready by the end of this week and the bank’s board meeting scheduled for Sunday, will be the decisive factor.

“As NIBL board was satisfied with the DDA report, it has already decided to go into merger with HBL. Now it is up to the HBL board,” informed Jyoti Prakash Pandey, chief executive officer (CEO) of NIBL. “Now, if the HBL board is satisfied with the DDA report and agrees for the merger, we plan to complete the merger process by mid-July and start joint transaction from July 16.”

Earlier, both NIBL and HBL had agreed to undergo DDA for computing the values for the swap ratio. Ashok Rana, CEO of HBL informed that the bank’s board meeting, which will take place on Sunday or Monday next week, will take necessary decisions on merger with NIBL based on the DDA report.

The swap ratio is estimated to be around 1:1 as agreed by both NIBL and HBL.

“Our DDA report will be ready by this week. The report will support us to make some concrete decision regarding merger with NIBL,” informed Rana.

If HBL board agrees with the merger, officials of both banks will form a joint merger committee which will discuss and determine the timeline of merger procedures while both banks will also take merger approval from Nepal Rastra Bank.

In fact, NIBL CEO Pandey, on a light note, informed that both banks have already drafted the memorandum of understanding (MoU) documents.

HBL was established in joint venture with Habib Bank (Pakistan) by Himalayan Shamsher Rana in 1993 and he is still on the board of directors of the bank. Ashok Rana, the current CEO of HBL, is his son.

NIBL, previously known as Nepal Indosuez Bank Ltd, was established in 1986 as a joint venture between Nepali and French partners.

Interestingly, Prithivi Bahadur Pandey, the chairman of NIBL, is the the son-in-law of Himalaya Shamsher Rana. Also because of this family ties between these banks, both banks had been looking into the prospect for merger since long. 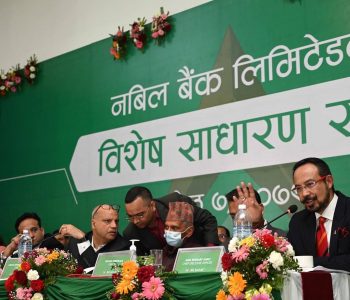