KATHMANDU: Announcing attractive offers ahead of the festive season has become like a culture in the Nepali market. Be it IT companies or simple apparel shops, everybody adds to the festive vibes by introducing various schemes and offers to attract customers during Dashain and Tihar.

This year too, various smartphone brands including Samsung, Xiaomi, Oppo and Vivo, among others have come up with different offers even amid the unpleasant situation caused by the coronavirus pandemic.

Samsung, one of the oldest and probably the most popular smartphone brand in the country announced the ‘BadaDashain, Big Dhamaka’ offer for its customers on October 2. Under the offer, customers buying Samsung smartphones or tabs from its authorized showroom or retail stores can win a Renault Duster SUV as a bumper prize. Likewise, under its weekly Big Dhamaka lucky draw, five customers stand the chance of winning a Honda Hornet 160 R each and 10 customers could win Samsung Galaxy Note 20 each. 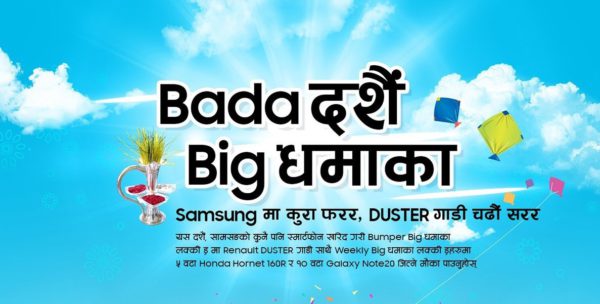 To participate in the scheme, buyers have to either dial *#06# or go to Setting and Check ‘About Phone’ for the serial number. After this, they need to send SMS to 31003 by typing <space> and the Serial Number of the newly purchased Samsung smartphone. The offer will be ending on November 17.

Xiaomi, one of the top-selling smartphones in Nepal, is also cheering up the Nepali customers with its festive scheme called ‘Celebrate Dashain with Mi’ which started on September 1.

To participate in the offer, one has to buy a Xiaomi smartphone between September 1 and October 25 from the authorized stores of Xiaomi. The company will collect the IMEI numbers of the purchased smartphones and conduct a lucky draw every Friday and announce the name of the winners. The names of the bumper prize winners will be announced on October 30. The offer lasts till October 25.

Another global smartphone brand, Vivo, has also come up with its festive campaign titled ‘YoDashainTihar, UpaharkoBahar’ effective from October 9. Under the campaign, customers from its authorized showroom or retail stores can win various prizes such as 43-inch Smart TV, earbuds, powerbanks, screen replacements and earphones, among other gifts through a lucky draw.

Two lucky winners could win TVS Ntorq 125cc each as the bumper prize. The company has announced it will offer gifts to more than 12,000 Vivo customers this year. Besides this, there are also attractive finance offers such as no-cost EMI option and zero down-payment schemes on the purchase of every Vivo smartphone costing more than Rs 15,000.

To participate in the offer, customers buying Vivo smartphones have to scan the Activity QR Code in the flyers/posters and fill in the required information. After this, a Spin Wheel will appear and start moving automatically to provide the lucky draw result on the spot. The company will inform the winners about the delivery of their prize.The campaign is valid till November 30.

Winners will be announced on October 17, 23 and November 15, respectively, via OPPO Nepal’s official social media platforms. OPPO customers can participate in the campaign by sending typing OPPO <Space> IMEI number and SMS it to ‘37001’ for OPPO phones. Customers who purchase IoT devices have to type OPPO <Space> CMEI code or DC code and send an SMS to ‘37001’.