KATHMANDU: The 18th annual general meeting (AGM) of the Confederation of Nepalese Industries (CNI) has named Senior Vice-President Vishnu Kumar Agrawal as the new president of the business body for the next two years.

As per the CNI statute, the senior vice-president is automatically appointed as the organization’s president and Agrawal’s appointment to the confederation’s presidential post followed the same format.

Since the last one and half decades, Agrawal has been actively working in the CNI in various positions including the members of national council and coordinator of various committees.

Taking over business from his father Late Shree Prahlad Roy Agarwal, his inspirational icon as Binod Chaudhary, Agarwal transformed MAW in last 25 years from a 1 products venture to 17 products venture and the company is still growing. As Chairman of MAW organization now with 12+ active institutions, Agarwal always highlights the MAW core values and ‘people’ as his key success factors. 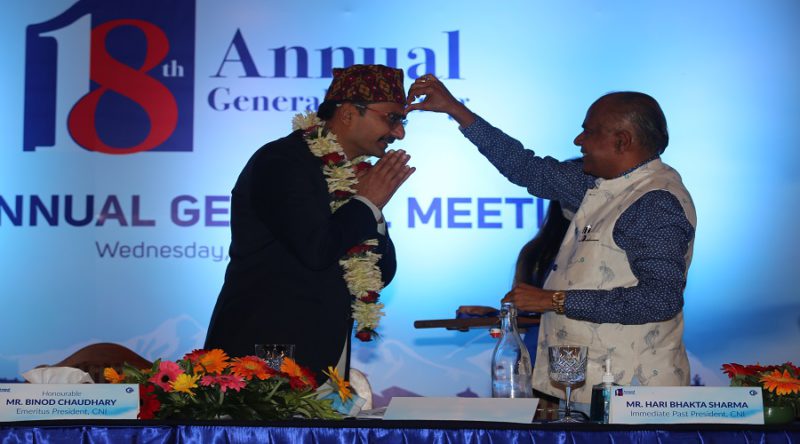 Always exploring but not ever hungry Agarwal has installed an Organic Growth Model at MAW which is about Starting Small – Sustaining, Learning More – Scaling up. His organic growth model has keep keeping him grow steadily – humbly, yet strongly.

A man with enormous diligence and persistence, Agarwal grew not only within MAW territory, but also embarked into Nepal’s economic ecosystem as an active enabler. As then young industrial leader of CNI – YEF at CNI, he founded the CNI – YEF forum which is still a very vibrant group of Young Entrepreneurs of CNI.

He is still remembered for his initiation at Nepal Infrastructure Summit, a Summit first of its kind that brought multi stakeholders of infrastructure system together. His commitment towards Public Private Partnership, Promotion of Make in Nepal campaign, better environment for industrialist are some noteworthy mentions that explains his interest to serve the country more. He has also set up MAW Foundation to serve communities more. MAW Foundation currently works on Children, Education, and Vocational Skills.

Talking to Fiscal Nepal, Agrawal said, “It is certain that my tenure as president in CNI will be challenging as the entire country is reeling under Covid-19 havoc and the economy is left shattered. However, I am optimistic that we can collectively fight this crisis and improve the business scenario.”

Under his leadership, Agrawal said that CNI will primarily work on expediting industrialization in Nepal, creating employment opportunities and sustaining them. “It is crucial that we expedite industrialization as it ensures additional job opportunities. We need to collectively address bottlenecks of industrialization and one of them could be focusing on generating skilled and trained manpower in the industry sector,” said Agrawal.

Agarwal plans to spend the rest of his life enabling entrepreneurship at family, community and national level. As part of his growth model, he is learning angel investment and entrepreneurship mentoring.

Call for reforms in transparency of fiscal information