KATHMANDU: An extremely rare disease called monkeypox, a much less severe cousin of smallpox, is spreading around the world. More than 250 cases have been reported in at least 16 countries, according to the World Health Organization. Experts say it is spread by close and prolonged contact with an infected individual.

“The countries that are reporting monkeypox now are countries that do not normally have outbreaks of monkeypox,” Rosamund Lewis, head of the smallpox secretariat, WHO Emergencies programme, said Tuesday during a news briefing at the United Nations in Geneva.

Monkeypox is endemic near tropical rainforests in central and west Africa, but it has increasingly been seen near urban areas, according to WHO.

“This is an emerging disease. It has been emerging for the last 20 to 30 years, (so) it’s not unknown, it’s very well described,” Lewis told reporters. “The risk for the general public, therefore, appears to be low, because we know that the main modes of transmission have been as described in the past.” 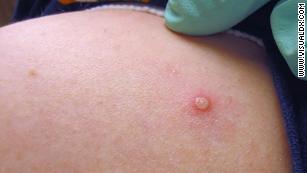 Cases in other parts of the world than Africa are typically linked to international travel or imported animals infected with the pox, the CDC said.

Several cases of monkeypox reported in the UK have been among people who had no known travel or contact with others, but there is no cause for alarm, US Surgeon General Dr. Vivek Murthy said Thursday on CNN’s “New Day.”
“At this time, we don’t want people to worry,” Murthy said. “These numbers are still small; we want (people) to be aware of (the) symptoms, and if they have any concerns to reach out to their doctor.”

What are the initial symptoms of monkeypox?

There is an incubation period of some seven to 14 days, the CDC said. Initial symptoms are typically flu-like, such as fever, chills, exhaustion, headache and muscle weakness, followed by swelling in the lymph nodes, which help the body fight infection and disease.

“A feature that distinguishes infection with monkeypox from that of smallpox is the development of swollen lymph nodes,” the CDC said.

Next comes a widespread rash on the face and body, including inside the mouth and on the palms of the hands and soles of the feet.

The painful, raised poxes are pearly and fluid-filled, often surrounded by red circles. The lesions finally scab over and resolve over a period of two to three weeks, the CDC said.

In the current outbreak, there appear to be a higher number of cases causing rash in the groin area of patients, according to the WHO and CDC.

Overall, monkeypox risk is moderate for people with multiple sexual partners and low for the broader population, according to a rapid risk assessment report published Monday by the European Centre for Disease Prevention and Control.
However, monkeypox is not considered a sexually-transmitted disease.

How is monkeypox spread?

Close contact with an infected individual is required for the spread of the monkeypox virus, experts say.
Infection can develop after exposure to “broken skin, mucous membranes, respiratory droplets, infected body fluids or even contact with contaminated linen,” Neil Mabbott, personal chair in immunopathology at the veterinary school of the University of Edinburgh in Scotland, said in a statement.

“When the lesions have healed, the scabs (which might carry infectious virus) can be shed as dust, which could be inhaled,” said Dr. Michael Skinner, who is on the faculty of medicine in the department of infectious disease at Imperial College London, in a statement.

Transmission between people can occur through large respiratory droplets, and because such droplets typically travel only a few feet, “prolonged face-to-face contact is required,” the CDC said. This puts healthcare workers and household members caring for or living with someone who is actively infected at greater risk, according to WHO.

Smallpox, which was eradicated worldwide in 1980, was also spread primarily by direct and prolonged face-to-face contact between people, as well as objects contaminated by infected fluids, such as bedding or clothing.

“Smallpox patients became contagious as soon as they developed sores spread the virus though droplets with coughing or sneezing. They remained contagious until their lesions resolved,” said Dr. Paritosh Prasad, director of the Highly Infectious Disease Unit at the University of Rochester Medical Center in New York.
However, based on available historical information, monkeypox appears to be less contagious than smallpox, Prasad said.

“Monkeypox can be a serious infection, with mortality rates from this type of monkeypox virus having been around 1% in other outbreaks. These are often in lower-income settings with limited access to health care,” said Michael Head, senior research fellow in global health at the University of Southampton in the UK. There are no reported deaths from the current outbreak.

However, in the developed world, “it would be very unusual to see anything more than a handful of cases in any outbreak, and we won’t be seeing (Covid)-style levels of transmission,” Head said in a statement.
Common household disinfectants can kill the monkeypox virus, according to the CDC. CNN

Foreign investment up by 18 percent in last one year