KATHMANDU: The 750-megawatt West Seti Hydro Power Project based in the Sudurpaschim Province has entered a new phase of development with the signing of a Memorandum of Understanding (MoU) between Nepal and India to this regard.

Indian state-owned NHPC Limited and the Investment Board Nepal (IBN) signed the MoU to develop the much-awaited project on Thursday. The development of the storage type project listed as the project of national pride was a dream of Nepal for around forty years.

Confusion over the implementation of the project was looming large with international companies: SMEC from Australia and Three Gorges from China, leaving the contracts to develop it in the mid.

Now, the NHPC which carries a history of developing projects equivalent to around 7,300 megawatts in Himachal Pradesh, India and other areas has agreed to develop the West Seti and 450 –megawatt Seti River-6 Hydropower Project under a bundling model.

As pledged by NHPC Chair and Managing Director Abhay Kumar Singh during the MoU signing ceremony, the Project will find its tentative shape within a year. Australian Snowy Mountain’s Engineering Corporation (SMEC) has prepared a detailed project report in regard to the West Seti and China’s State-owned China Three Gorges Corporation has also carried out a re-study on the DPR readied by the SMEC.

It would not be an exaggeration to say that Thursday’s development has obviously provided a ground to believe that we need to wait long for getting our dream of illuminated days to come true.

Nepali is making efforts to explore and reach its untapped potential for hydropower development which is one of the top priorities.

The decision to take the West Seti ahead is itself a significant achievement. The Arun III Hydropower Projects reports above 50 per cent physical progress. Likewise, processes are ahead to develop the Lower Arun and Arun IV Projects in partnership with the Indian company Satluj Jal Vidyut Nigam, known as SJVN, the developer of the Arun III. 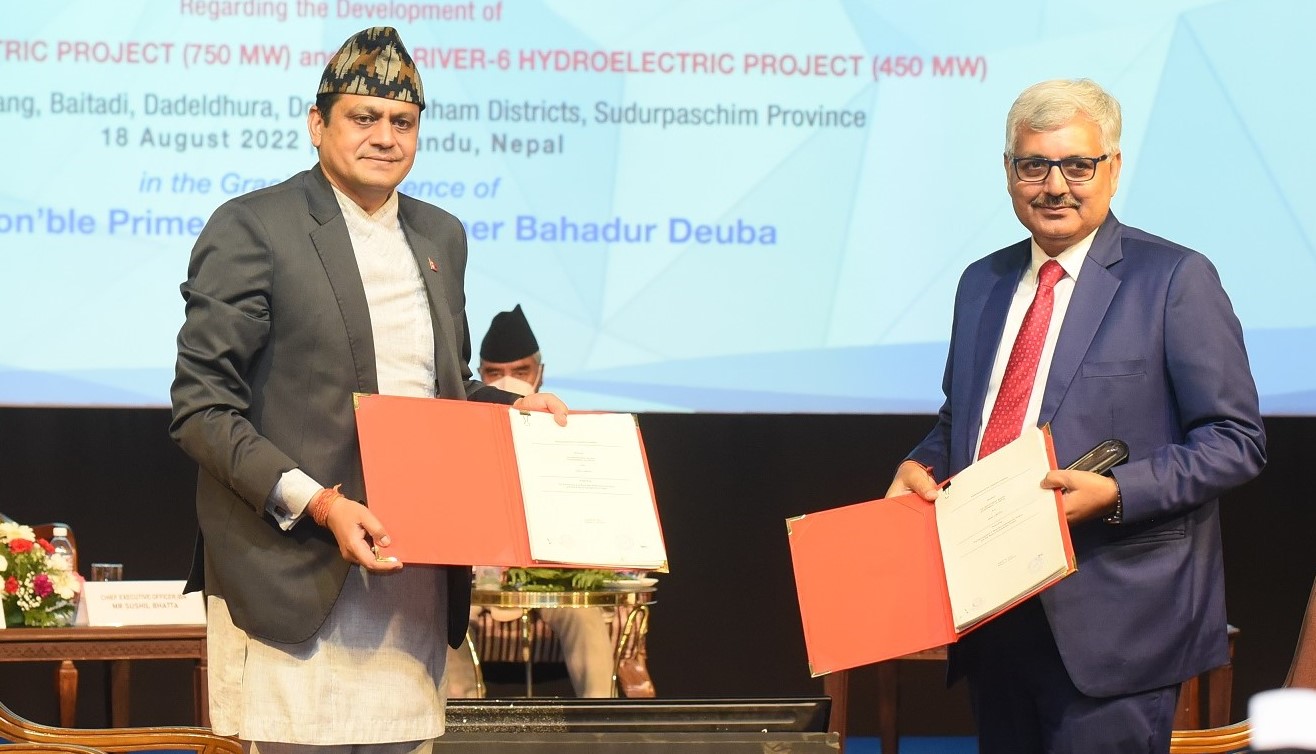 Prime Minister Sher Bahadur Deuba who was present to grace the MoU signing-in ceremony declared the Project is crucial not only for the development of the Sudurpaschim but also for the overall economic and social development of the nation.

Chief Executive Officer of the Investment Board Nepal, Sushil Bhatta, and Chairperson and Managing Director of NHPC, Abhay Kumar Singh, signed the MoU on Thursday.

An understanding has been reached between NHPC and HIDCL regarding collaboration in the energy sector in course of the investment summit organised by the Board in 2019.

The proposer has to file an application for West Seti Hydropower Project survey permission within 45 days after signing the MoU. There is a provision that an application should be filed within six months for the Seti-6 project. An arrangement has been made where the company has to submit its report to the Board after carrying out a detailed project report within two years from getting survey permission. It might not take such a long time as all preparatory activities of the project have already been completed.

The MoU has mentioned that different issues including estimated cost, market assurance, and guarantee of financial sources should be incorporated in the report.

The two sides would hold a discussion on Project Development Agreement (PDA) and the Board would facilitate it.

The Indian Company-NHPC has already constructed hydropower projects generating more than 7,000 MW of power. The company has expressed commitment to completing the project on time.

NHPC to seek market in India

The Board’s meeting on August 8 this year had assigned NHPC to take charge of the Project’s works. The Indian company had proposed to seek a market in India for electricity produced in Nepal apart from making arrangements for financial and technical management of the Project.

Following the visit of Nepali’s Prime Minister Sher Bahadur Deuba to India last April, the Project which was on ‘hold’ by the French, Australian and Chinese companies from time to time is now bound to proceed in a new manner with a clear framework.

The NHPC Limited has submitted an application to the Board to implement the Project through dialogues, the Board said. Board’s 47th meeting had formed a committee coordinated by the vice-chairperson of the National Planning Commission Bishwanath Poudel to prepare a draft on the modality of development and investment of the West Seti and Seti River-6 Joint Hydropower Project.

The Board had decided to implement the recommendations furnished by the Committee on the Project. Former Energy Secretary Anup Kumar Upadhyay viewed that there was no other better option than this Company which was owned by the Indian government and had a specialization in the hydropower project.

Upadhyay further expressed, “This project will proceed now onward since NHPC is technically and economically sound and can provide market to the electricity produced here.” The locals in the project sites were waiting forever to see the Project, initiated in 2036 BS, come to fruition.

Lack of clarity on the modality of construction, lack of decision on construction of transmission line, settlement of the displaced ones and no determination on market for the produced electricity among others had pushed the Project in limbo for a long time. Now the Sudurpaschim folks are confident that the Project works will move ahead.

The Chinese company- Three Gorges – had also cited the same reason when it pulled out of the project.

According to officials involved in the project, the Australian company, Snowy Mountain Engineering Corporation (SMEC), which was engaged in preparing the detailed project report (DPR) of the project since August 1989, submitted its report in 1992. The agreement signed with SMEC on the build-own-operate-transfer (BOOT) model was never implemented.

From frying pan to fire

The project was given to the CWE Investment Corporation, a subsidiary of the Three Gorges Company of China, in 2011. The Nepali people were confident that the Chinese construction company would take ahead with the project as this same company had built the 22,500 megawatts capacity Three Gorges Hydropower Project in China. An agreement was reached to set up a joint company with a 75 per cent share of the Chinese company and a 25 per cent share of the Nepal Electricity Authority (NEA). The total estimated cost of the project was Rs 180 billion and it was also agreed to bring in Rs 150 billion foreign loans for the project. Had the works been carried out as per the agreement, the project would have already started generating electricity last year alone.

The government had been even allocating budget each year for this project until 2018. Although it was said that the construction of the project would be started by fixing an appropriate modality for it after that, it was inconclusive.

It is stated in the government’s policies and programmes for the current fiscal year unveiled by President Bidya Devi Bhandari on May 24, 2022, in the joint session of both houses of the Federal Parliament that the construction of the West Seti and the Seti River-6 projects would be started. Similarly, the budget for the current fiscal year which the government announced on May 29 also clearly mentions the project. This also has given a basis to believe that the project will make progress in one way or the other.

The Seti River originates from the Saipal Mountain in the Bajhang district and it joins the Karnali River when it reaches Achham after flowing through Baitadi, Dadeldhura and Doti. The two projects are based on the Seti River.

Hydropower experts and planners are of the view that Nepal should now concentrate on deriving maximum energy and benefit from both the projects and facilitate in their construction. RSS

Call for reforms in transparency of fiscal information