KATHMANDU: Electricity backup systems are needed to address the temporary grid failure, short-term electricity supply at the locations without grids, power surges, and massive blackouts. These power backup technologies include a combination of batteries and generators operating mostly on fossil fuels.

Carbon pollution and extreme weather condition are becoming new normal across the globe. Greenhouse gases from fossil fuels burned for electricity, heat, and transportation are the prominent reason behind this. Energy transition to control carbon pollution is a global concern.

So, concerns regarding instant start capability with generators, noise, and mainly due to carbon emissions have encouraged to look for alternatives with low carbon technologies based on renewable energy sources. Stored electricity from solar, wind and other renewable sources are emerging as cost-competitive alternatives to fossil fuels-based power backup systems.

Global concern and need for  the energy transition

Our frequently used energy sources are mostly unstable in nature with fluctuating energy density. For a smooth transition to renewable energy, it requires a clean source with flexible energy density. Green hydrogen produced from a renewable source like hydropower or solar can be stored during excess energy or fluctuating power and then be re-electrified to meet energy demand.

Due to the high energy density, diversified production source, and easy storage and transportation, hydrogen is emerging as an effective and efficient energy carrier for an alternative to power supply systems. Hydrogen has a higher energy density and thus can be the missing link in this transition. 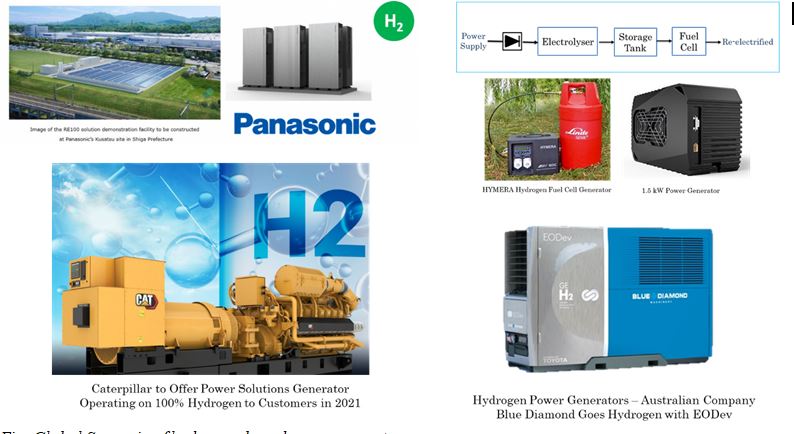 Fuel cell is a growing technology and has the potential to channelize hydrogen energy as an alternative to carbon-intensive power supply systems. In the fuel cell, hydrogen combines with oxygen and produces electricity.

The fuel cell has large continuous run-time, greater durability within a wide range of environmental conditions, and with fewer parts and remote monitoring reduces maintenance cost.

One kg of hydrogen contains 33.33 kWh of usable electricity compared to 12 kWh/kg of petrol and diesel. In the case of Nepal, one kg of hydrogen is sufficient to power an average size house.

The study on green hydrogen potentials from surplus hydro energy in Nepal shows the Hydrogen production costs to US$1.17 per kg while the rest of the world has been able to reduce the cost to US$3 per kg so far.

Existing industries and different countries are coming upfront to establish hydrogen-based power backup systems. Caterpillar Inc. an American company that has been powering the industrial, marine power systems, oil, and gas with 5 to 16000 kW backup diesel-based generator systems has recently announced to offer power solutions generator operating on 100% hydrogen to customers in 2021.

Similarly, big power generators companies like Bladon, Panasonic, etc who used to be based on diesel are now leading their research towards hydrogen-based power backup generators. Shopping Malls, hospitals, and big manufacturing companies have already installed such systems in Europe.

Where are we as the Country gifted by ample renewable energy potential?

In this context, low-carbon electricity from renewables has to become the preferred energy carrier and it needs intensive research and investments from all the stakeholders.

The fuel cell is a robust design with several parameters that control its operation and capacity. In Green Hydrogen Lab, we have done a parameter-based modeling approach to establish a connection of power demand with hydrogen production.

With the study, the lab is now capable to develop a technical design of hydrogen-based power backup system that can be installed in hospitals, shopping complexes, universities, and houses.

Sooner or later this technology will come to Nepal, all we need is continuous research in this direction and with the support of government and stakeholders, we will be in the same race as other countries towards carbon neutrality and energy independence.